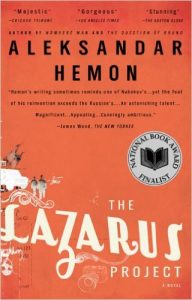 In 1908 a Jewish immigrant named Lazarus Averbuch knocked on the door of Chicago’s police chief.  After handing the Chief Shippy a letter (we never learn what it says), a frightened police force shoots Lazarus several times until he is quite dead.  Aleksander Hemon writes one fictional account of Lazarus’s murder, a second of the author’s parallel immigration from Bosnia to the United States, a third about his investigation into Lazarus’s origins in Eastern Europe and life in Chicago’s tenements, and a fourth as a travelogue back to Bosnia taken by the author and a fantastical story-telling companion named Rora.  Lazarus dies because deeply anti-Semitic law and order fears anarchists are destroying America and anyone with dark skin, big ears or a nose that might be Jewish is suspect.  Immigration to a new country is awful, except it is not as bad as the pogroms that drive you to flee.  Getting an author’s grant to take adventures through post-war Sarajevo and rural slavic countries provides good product for a novel, but ambitious, and award-winning as the novel is, the multiple story lines all remain too independent to cohere into a compelling whole.