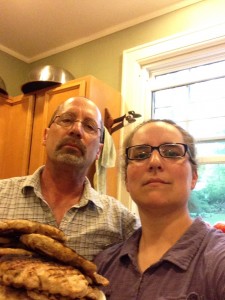 My longtime friend, Jen, has gone big-time into fermentation.  She’s making ginger beer.  I gave her a Kombucha scoby that she is turning into super-fizzy kombucha experiments with cherries, limes, ginger, and oranges.  So to satisfy her urge to learn sourdough she drove out from Cleveland for a weekend of baking and a jar full of starter.  Above, we are holding our stack of barbecued flat breads that we used to smother in baba ganoush.  We roasted the eggplants on the barbecue, which is a trick I learned in the Middle East.  The charred skin sends a smoky caramelized flavor to the deflated pulp even after you peel it. (You can achieve the same result under a broiler and the strong heat will make the eggplant deflate in record time.) The baba ganoush was warm and creamy when we ate it and the lightly bubbled flat breads were still lightly coated in olive oil from their grilling.

The next day we made rye buns to accompany a new recipe for squash-black bean burgers.  We also made a few baguettes that Jen ate on her way back to Cleveland. 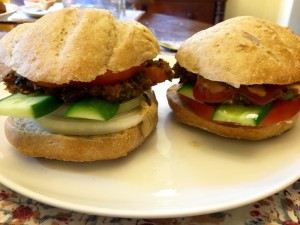