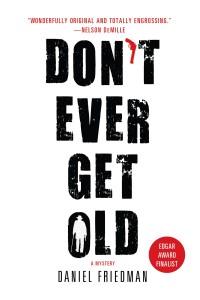 Buck Schatz, an 87-year-old former tough guy cop from Memphis has never dropped his crusty exterior nor belligerent attitude toward bad guys even though he’s been retired from the police force for thirty years.  Come to think of it, he hasn’t given up being nasty to nice guys, his wife, nor anyone else nor does he appear to have a soft interior.  So while he occasionally kvetches about his infirmities in Yiddish and hurls insults of his grandson, the law student, from time to time that are funny, it’s frankly hard to root for Schatz and his grandson while they hunt down a former Nazi prison guard, now suffering from dementia in an old age asylum in St. Louis, his stolen gold bricks, and a sicko murderer.  Schatz just isn’t that likable.  Moreover, if he can get away with it Buck wants to keep the gold for himself.  So where’s the Jewish morality in that?