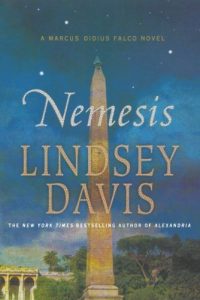 The twentieth book in the series on detective Marcus Didius Falco, this one in Rome and Latium in the year 77 AD.  In this mystery, Marcus, having just inherited an unexpected fortune from his father heads to the pestilential Pontine Marshes to hunt for a missing person and the reason one of his father’s payments was never collected.  The marshes harbor malarial insects and the kind of marsh people, and their rabid dogs, you might expect in the remotest hollers of Kentucky.  The mystery is typical of Davis’ previous Falco books.  The emergence of Falco’s daughter, Flavius Alba, as a burgeoning detective in her own right is downright joyful.  The real pleasure of the book, however, is the degree to which once again Davis brings to life ordinary Romans.  Their family squabbles, frustrations with intransigent authorities and truculent neighbors, and the hassles of finding reliable childcare are concurrently hilarious, modern, and part of ancient Rome.