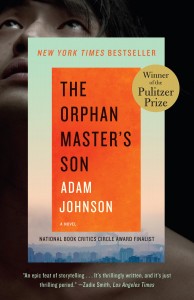 Jun Do, a North Korean John Doe, lives many lives.  He is an orphan in a camp for throw-away children, he undergoes pain training and learns to fight in abject darkness in the tunnels beneath the DMZ, he becomes a spy, a kidnapper, a prisoner, and an army commander.  That is more than is possible for anyone in North Korea where life is too often a drudge from morning factory or field work until evening when the electricity is turned off.  Yet, in Adam Johnson’s capable hands several clear images emerge.  North Korea is awful.  (For fuller and more accurate depictions, read Escape from Camp 14 or Nothing to Envy.)  While reawakening us to the horrors of totalitarian rule, Johnson also gets us to consider whether a person is only the sum of his or her actions or, rather, actions might be dictated by circumstance and a person is somehow more intrinsic.  Are we the sum of our stories, or as in North Korea, are stories too subject to stretch and warp?  As Jun Do spends a lifetime navigating North Korea he also has heart and courage, enough of both to inspire others.  Not to be overlooked, either, are jibes at America appearing in the guise of North Korean hyperbole.  As the Dear Leader’s nightly broadcasts on loudspeakers make all too clear, the United States really is a place where one in six are hungry, the poor live in the streets, and neither justice nor access to health care are free.  This one might be better to listen to as an audio book.  The readers are terrific.