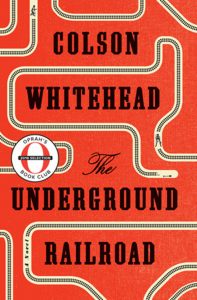 Before Colson Whitehead ever gets to the story of Cora’s attempted escape from enslavement, he sets the stage in Africa.  Cora’s grandmother and mother are captured beginning a saga of human beings herded, branded, chained, transported, discarded when insufficiently healthy, and sold like so many pieces of meat.  Some are consumed, others are tossed overboard or left to rot.  Whitehead’s descriptions of the relationship between white slave owners and the human beings they own is a delicately painted portrait of white men using all their faculties to subdue the humanity of their black workers with rape, torture, and psychological brutality.  For this portion of the book alone, the real-life portrayal of slavery in the south, The Underground Railroad should be required reading of all Americans.  Whitehead’s description of plantation work for slaves also makes the idea of escape almost logical.  The alternatives are equally daunting: staying on the plantation means ceaseless labor, sexual assaults, tongue extractions for speaking up, castrations for being black and male and therefore a threat to white men’s sense of superiority, and beatings so severe that infections beneath missing skin are inevitable.  Leaving for the underground railroad, in contrast, means fearing owners so desperate to regain their lost property that dogs trained to shred human tissue and professional slave catchers brandishing chains and iron collars will be sent even into free states to recapture lost goods.  Cora’s lifelong sprint for freedom is harrowing, accurate, and the story of an underdog for whom you can’t help but root.  Her plight is also an important reminder that in the age of Charlottesville the legacy of slavery has not yet been overcome.