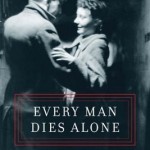 Published originally in 1947 in postwar Germany and only translated into English in 2009 this is a fictional recounting of a true story: a Berlin factory worker decides to take on the Fuhrer.  The book reads more like a long newspaper article – characters are flat, the plot is dispensed with in the first few pages, and the author focuses on the facts rather than the conventions of a novel – but the story is oddly compelling.  A German citizen actively opposed to the Nazis! described by an author who was once the toast of German literary society.  After having one of his pre-war books turned into a movie by a Jew, however, he spent years in Nazi jails.  December 2009.