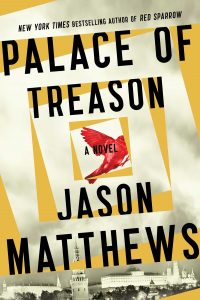 The second in the series involving a a love affair that really should never happen between an American CIA spy, Nathanial Nash and the mole he is running inside the KGB, Dominika Egorova.  Egorova has risen high enough inside the Russian spy network she has become a confidante of Putin.  The poor parts of the novel include flat portrayals of Russians — they are all venal, evil, and flatly portrayed destroyers of western values, equal and opposite descriptions of American spies whose patriotism is the only thing that might save the world, and love-making scenes between Nate and Dominika that sound like they were written by a spy who spent 33 years doing analysis for the CIA, which is what Matthews did before becoming a novelist.  All the women in the book have breasts and nipples.  Their love making skills are about as sexy as that last sentence.  But, get over those superficialities, and the spycraft described in this book is so realistic, intriguing, suspenseful and informative you will readily plow up its pages and find yourself waiting impatiently for the next installment.