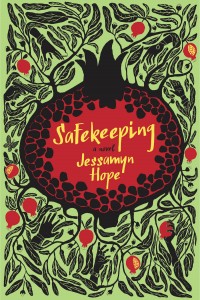 Safekeeping is a description of common characters residing on an Israeli kibbutz in the late 1990s.  At the center of the story is Adam, a drug addict from New York city, on the lam and carrying a 700-year-old brooch.  He stumbles into Ulya, a sexy, ambitious Russian immigrant to Israel, who feigned a Jewish identity to escape the confines of Russia only to find herself trapped in a tiny country and inside an even tinier commune.  Claudette, is a French Canadian volunteer with an unrelented case of OCD.  Ancient, dying, Ziva represents the Israeli pioneers that fought for the country’s independence and social identity.  There are Arab workers and young soldiers sent to keep peace on the West Bank.  Everyone is indeed universal: I met a variant of each one on Kibbutz Ketura when I live there.  In the end, however, despite the meticulous notes that Jessamyn Hope must have taken when she lived on her kibbutz, very few of the characters feel complex enough to fully engage our sympathy.  Not even the brooch.