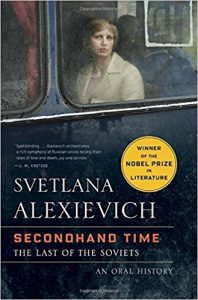 Alexievich won the Nobel Prize for her oral histories of Russia and the Soviet Union.  Secondhand Time includes exquisitely curated accounts of members of the Former Soviet Union beginning with old-timers that can still recall Stalin.  She speaks with citizens still longing for the stability Stalin’s rule ensured and intermingles enough survivors of the gulag to make clear that nothing was worth the bloodshed and destruction that accompanied Stalin’s tyranny. She continues with accounts from the post-Stalin era through the Yeltsin restoration of order and Gorbachev’s opening to capitalism.  Her interviewees make abundantly clear that replacing the communist ideal of equality for all with the frenzied shark attacks of capitalism has not been a smooth nor beneficial transition.  The oligarchs have profited beyond anyone’s wildest needs and the needy have been left to struggle to survive.  Young people that have never known anything but capitalism, according to their elders, worship materialism over community and mutual support.  Like many Russian pieces of literature, Secondhand Time is extensive and thorough, almost as if you were in kitchen after kitchen drinking Russian tea and then vodka deep into the night.  The final picture is masterful, with one caveat.  Alexievich never really describes her methods and there is some evidence that she has moved quotations from one speaker to another in different publications suggesting some of her books might be as much fiction as non-fiction.  That changes how you read her, I’m afraid.