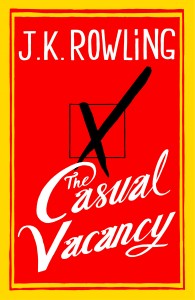 The plot entails a battle in city council, in Britain called Parish Council, over whether the poorer neighborhood of Yarvil should be cut free from the upper crust, up-the-hill village of Pagford. The real story, however, is about the members of the community themselves. Everyone, as is often so true in a small town, has a carefully manicured exterior and a story to hide. One wife thinks she might really be in love with another’s husband; a second is bored with her marriage and fantasizes about muscled rock stars; a lawyer is afraid to commit to a divorced girlfriend who has moved to town with her teenage daughter on his account; the high school disciplinarian is dogged by OCD; one husband abuses his wife; and a poor drug addict of a mother has more of a history than meets the eye. Captured most accurately by Rowling are the teenagers of Pagford who wrestle with love, sex, alcohol, cigarettes, acceptance, rejection, and the agony of adolescence. Like her Harry Potter series, which inevitably lingers about this book, Rowling’s insight into what we are all really thinking versus what we wish we projected is spot on. The major flaw is that she follows too many characters. I needed to draw up a scorecard to keep them straight.