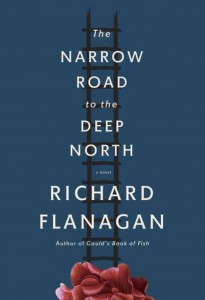 In the central third of this novel, a New Zealand prisoner of World War II, enslaved by the Japanese endures countless, excruciatingly detailed horrors in the jungles of Burma.  Only he really doesn’t.  Flanagan does a terrific job of describing kiwis, aussies, and other British subjects who are being driven by their Japanese captors to build a railway through the rainforest.  Soldiers starve while working ungodly hours to construct an aimless path through the forest using not much more than their bare hands, fear of being beaten (again), and their slowly diminishing will to survive.  They contract ulcers, beri-beri, pellagra, cholera, gangrene, and when they are lucky enough, death.  The protagonist, Dorrigo Evans, is the doctor who treats them all and lives throughout the book an extended male fantasy.  In the jungle, Evans never really has to do hard labor.  He is elected de facto leader of the camp, yet contracts nothing more than a scratch on his shin, the hardship of having to forego a steak as a sign of leadership, and receipt of a letter from his fiance that his mistress is dead.  And that brings us to the first third of the book, wherein Evans, bored with his straight-laced fiance takes up with the voluptuous and sexually adventurous wife of his uncle.  And in the last third, after the war, when his fiance takes him back, Evans continues to dally with innumerable additional romances.  There you have it.  In convoluted writing and obscure passages we track a man who is a war hero and unrepentant philanderer.  What more could any male reader ask for?  This book won the 2014 Mann Booker Prize and made a lot of 2014 must-read lists, so I might be the only one that didn’t care for it, but seriously?