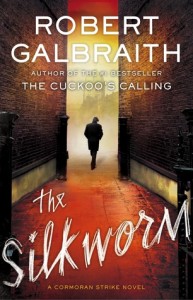 Let’s first state the not-so-obvious: Robert Galbraith is the pseudonym used by J.K. Rowling of Harry Potter fame for her mystery series featuring detective Cormoran Strike and his assistant, the alluring Robin (no obvious relation to Batman’s loyal sidekick.)  The Silkworm features Rowling’s marvelous ability to capture character, dialogue, and contemporary London’s ether.   The Silkworm is Strike’s second major case in which the metro police have misapprehended a perpetrator.  To catch a killer, Strike must infiltrate the self-important world of authors, editors, publishers, and agents, and more tedious still, analyze a piece of contemporary obscure prose.  No doubt Strike is serving as Rowling’s mouthpiece for a world she only joined through great effort and for which she presumably maintains only marginal respect.  The whodunnit is legit, the main characters suitably on the knife edge of credible and over-the-top, the book a little too long, and Rowling’s mastery of the written word on full display.