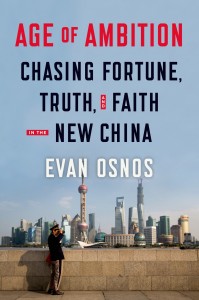 Evan Osnos has been living in China for the last eight years and reporting for the New Yorker for much of that time.  Age of Ambition is his compilation of perceptions of a country undergoing transition from the third world to the first at the speed of a bullet train.  For the record, China is constructing more bullet train railways, and highways, more quickly than any country ever has in the history of the earth.  That rush to modernity has been accompanied by graft, kickbacks, errors, phenomenal success and total government control.  Throughout this book the government’s secret management of the internet, publications, journalism, freedom of assembly, and religious thought remains omnipresent and mysterious, just like one of the large, unmarked buildings on Tiananmen Square occupied by government censors.  Osnos’ focus remains on Chinese intellectuals that dance on the edge of permissible thought in China, sometimes exciting millions of followers and at other times paying for their transgressions with jail terms.  It isn’t the whole story of China, the country is too large, diverse, and dynamic, but it is an interesting one.  Makes you wonder what an analogous analysis of the U.S. might look like.