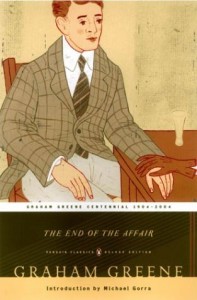 Greene is supposed to be one of the great storytellers of our age, and this version read aloud by Colin Firth (pitter pat goes my heart) won two separate awards for audiobooks, but frankly, what a sleeper.  Maurice Bendrix, just like the author, Graham Greene, has a torrid affair.  In this version, she is disguised as Sarah Miles (though the book is dedicated to his real paramour), who is married to a British bore named Henry.  The story reads like the Graham Greene’s fantasy.  Anyway, back to the plot which plods along with great pain due to our protagonists insatiable jealousies.  Then the book turns religious as most of the characters wrestle with their consciences, in great detail, over the existence of God.  That might have been important in England in 1951 when second World War memories were still fresh and the book was recently published, but I can’t say it makes worthwhile reading today, unless you are a pro at mid-twentieth century Brit lit.