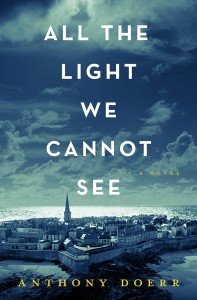 Two parallel stories.  In France, a teenage girl, blind since the age of five, has her life turned upside down when the Germans invade Paris.  She flees with her father to Saint Malo on the coast where she lives under German occupation in further darkness when, for her safety, she is secluded in an uncle’s house.  The uncle, a veteran of WW I, suffers from PTSD and never leaves the house.  Her father, as any solo parent of a blind girl would, does everything in his power to protect her.  He constructs miniature wooden models of Saint Malo in case his daughter ever needs to learn to navigate its streets.  Concurrently, a German orphan, also a young teen, faces a grueling life in the mines when he reaches the age of 15.  Except, he is immensely adept at working radios, yet another means of communicating with the world without really seeing.  His skills are so great he is drafted into the Nazi army, where he blindly follows orders, but worries that the orders are illogical, if not immoral.  The book is aptly named.