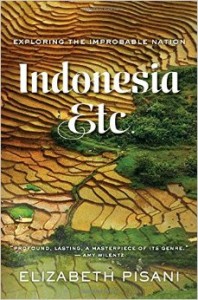 Indonesia is the fourth largest country in the world comprised of more than 10,000 islands and hundreds of languages and cultures.  From west to east it stretches the equivalent of Anchorage, Alaska to Washington, D.C. In Java, where more than half the population lives you can find hipsters, international businessmen, ungodly traffic, and muslim women covered from head to foot.  In the east, in Papua, bushmen live in the jungles.  It’s a thriving democracy and an inefficient, bureaucratic, corrupt nightmare of decentralized governance.  Ethnic divisions lead to mass slaughters and average Indonesians may be the most welcoming people on earth.  In most places you can find decent cell coverage, but might have to wait an interminable week before a boat arrives to take you from one island to the next.  Elisabeth Pisani has lived in Indonesia off and on for decades and has done her best to travel from one side of the country to the other talking, cooking, sleeping on rattan mats in crowded huts, and waiting with locals wherever she could.  She does a remarkable job of tying personal experiences of the variety of cultures who have come to be ensnared in the modern country called Indonesia to the national experience of a country rattling its way into the global marketplace of ideas and commerce.  Pisani’s writing is strong and engaging, but somehow the length of her trip is as exhausting to read about as it must have been to undertake.