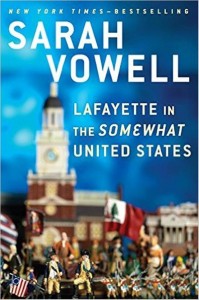 I love Sarah Vowell’s hip hop style of writing and she is hooked on an interesting fellow.  The Marquis de Lafayette arrived in the American colonies at the age of nineteen as an anti-British militant on loan from France.  He was useful, too, for an American army that George Washington was having a very difficult time organizing into anything more than a rabble with pitchforks and guns that don’t shoot straight.  Lafayette remains a friend of the newly founded country for decades and decades. Unfortunately, and I cannot imagine why she chose to write this way, Vowell never bothered to break her monologue into chapters or sections.  The whole thing is one long stream of consciousness, which periodically is rather enlightening, sometimes entertaining, and more frequently, breathlessly disorienting.