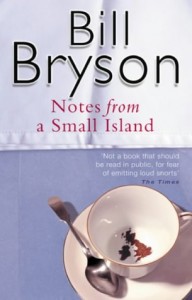 After a couple of decades of living in Britain, Bill Bryson decides to journey around the country one last time before moving with his family back to the U.S.  He takes seven weeks to do a grand loop stopping in towns large and small to describe the British Isles of the early 90s with special attention to beer, architecture, and people, in that order.  No doubt, the more you know of England the more you would appreciate his observations, but even without being able to fully appreciate the locales he was visiting, I was left with some rather wonderful impressions.  Firstly, Bryson reminds one of the value of seeing the world at walking speed.  That alone made me reevaluate the amount of daily energy I devote just to keeping up.  Secondly, tied as I am to the natural world, I don’t pay nearly enough attention to the power of buildings as individuals or in their collective.  Thirdly, this book is vintage early Bryson.  He is so funny on so many occasions I laughed aloud as if I was the one who had consumed one too many brews.  If you have a chance to listen to the audiobook.  It’s a remarkable read aloud.