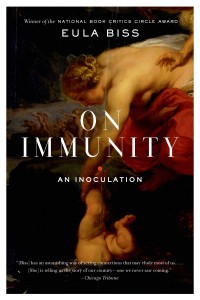 Every once in a long while you read a book by an author you recognize is much, much smarter than the rest of us.  Christopher Hitchens is one of those.  Eula Biss is another.  I picked up On Immunity thinking I was going to learn about New Age parents thinking they are protecting their children by forgoing inoculations.   And yes the book does dig into the science of how vaccinations succeed and how pseudoscience survives on the internet forever.  The study purporting to demonstrate that some vaccinations could lead to autism, for example, has been so thoroughly discredited as to exist only in a world inhabited by believers in alien abductions.  It would be a mistake, however to think On Immunity is only an account of germs and antibodies.  Rather, it is a work of philosophy covering the nature of who we have become as overprotective parents, men and women so concerned about perceived threats to our children, and our desires to keep them immortal like Achilles, that we are in practice creating national and international health hazards that will be borne by the poor and underserved in the healthcare system.  Our desire to remain undead forever is an invitation for Biss to discuss the inherent fear of parenting and the curse of Dracula who never died, and like a bacterial infection survived on the blood of others.