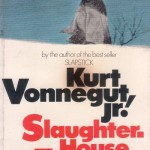 As a twenty year old soldier Vonnegut was one of the few people to survive the allied bombing of Dresden in World War II. For more than twenty years he wrestled with how to tell the story of the senseless and overwhelming destruction of a city and vritually all its inhabitants. What he decides upon is a fictional account of the absurd life of Billy Pilgrim, a soldier-nebish who travels in time and space and conjoins with science fiction characters. The book’s success is the novelty in which it portrays the absurdity of war by being an absurdist book. Or, it fails as just another late 60s acid trip of a tale. July 2008.