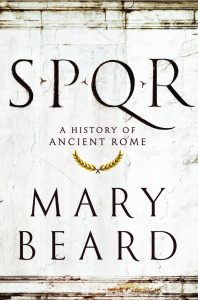 It is no simple task to recount the thousand year history of the Ancient Roman empire.  It isn’t even easy to determine when the empire begins or ends.  Compounding the difficulty is Roman proclivity toward record keeping meaning that they have left behind an extensive written record.  Moreover, Roman history has been studied and venerated by western historians for nearly two millennia.  What makes SPQR stand apart is the clarity with which Mary Beard tells the tale.  As a reader you sense that Beard has spent a lifetime reading original texts in Latin as well as innumerable treatises of historical analysis that followed. Rather than being muddled by what must be millions of pages of books and records, Beard has the remarkable ability to observe Ancient Rome from a drone and then zoom into examine individual artifacts.  Beginning with the founding of a tiny village in the hills above the River Tiber and continuing until  the wider Roman Empire made all of its inhabitants citizens near the end of the 4th century, Beard repeatedly makes clear what can be known from archaeological evidence and what must then be speculation.  Readers are given the opportunity to evaluate evidence along with her, free to agree or not with her interpretation.  What emerges is a living society with all its contradictions and multiple overlays of countries and cultures, rich and poor, workers and leaders, slaves and freedmen, farmers and laundrymen.  It is a nice departure from the glorification and focus on late Roman emperors as if they were Rome’s entirety.