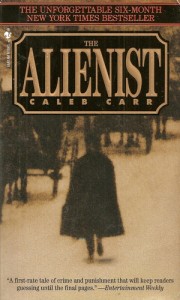 In the 1890s, Theodore Roosevelt did not yet have presidential ambitions.  As a young man he was trying to sweep corruption from the halls of New York City’s police department.  To sidestep detectives he doesn’t trust, Roosevelt turns to a reporter from the New York Times, Moore, and a psychoanalyst called Kreizler to solve a series of gruesome murders of young male prostitutes.  The descriptions of turn of the century New York are colorful, informative, and a loud reminder of the breadth of inequality suffered by immigrants living in hovels on the lower east side.  The only problem is that after 200 pages the first clues are only beginning to be assembled.  After 400 pages the killer has been identified and yet there are still a hundred pages to go.  It’s not a good sign for what is supposed to be a suspense-filled mystery when the reader is keeping such careful track of the page numbers.