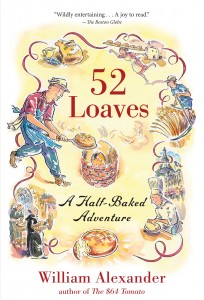 52 Loaves is one of those memoirs where a guy sets out to do something a little ridiculous, bumbles along, has silly adventures, and learns something meaningful along the way.  See, for example, Barbara Kingsolver’s Animal, Vegetable, Miracle, and The Know it All and The Year of Living Biblically, both by A.J. Jacobs.  In this instance, Alexander bakes a loaf of bread every week for a year until he manages to make the perfect loaf.  As befits this type of book, Alexander opens with many weeks of dense, tasteless, uninspiring loaves that test his patience, make his children long for croissants, brioche, and real bread, and cause his long-suffering wife to roll her eyes every weekend at her her inept husband’s kitchen flailings.  With time, of course, Alexander learns the science of bread making, the art of bread making, and the six-thousand year history of bread eating and presents it all in a way that is warm and light, much like the bread he ultimately learns to bake from sourdough (did you hear that, fans, SOURDOUGH) in an ancient Abbey oven in the remote French countryside.