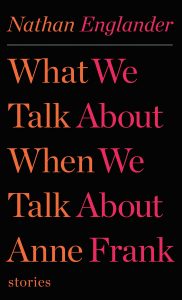 Eight short stories.  All of them sad.  Englander pitches his stories to test the limits of love in binding marriages, ageless friendships, families, and neighbors.  Two matriarchs of Israel’s settler movement are asked if they can continue to stand by one another as personal tragedies and then national tragedies overtake them.  Childhood friends from yeshiva are reunited after one has become an ultra-orthodox Israeli and the other the mother of a secular son in Florida.  Now both married they sit with their husbands and prod one another: for whom would they would sacrifice themselves to save another’s life?  Holocaust survivors pass a lifetime in an Israeli shuk acting upon, but not speaking of the unspeakable.  Englander’s stories make us think about our own boundaries and sometimes about what in the world he is up to when, for example, he places a protagonist in a peep show staring first at his Rabbi and then at his mother.  The author’s directive is that relationships are untrustworthy.