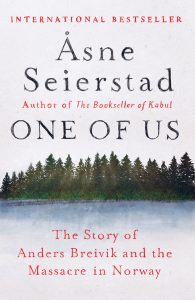 Even if you do not recall the Oslo terrorist attack in 2011, the opening pages of this book make certain there is no surprise.  Anders Breivik, a native of Norway exploded a homemade bomb in front of the Prime Minister’s residence and then drove a van to Utoya Island to murder socialist youth.  He killed seventy-seven people, most of them children, nearly all with gunshots to the back of the head.  Only a few pages after it opens, the story returns to the beginning of Anders Breivik’s life to uncover in page-turning detail his development as a right-wing terrorist bent upon preserving Norway’s ethnic purity from creeping left-wing government policy.  Breivik emerges as a psychotic, deranged killer.  Except his continued lucidity and consistent logic of self-defined clarity of purpose make him indistinguishable from any member of ISIS, the Taliban, fanatical Israeli settlers and their Hamas counterparts, the routine gun-wielding mass shooters that too routinely make our headlines, more than a few affiliate of the NRA, and several of my neighbors in northwest Pennsylvania.  One of us.  This book explains what runs through their minds and then asks us to define the border between idealistic soldier of freedom and the psychologically impaired.