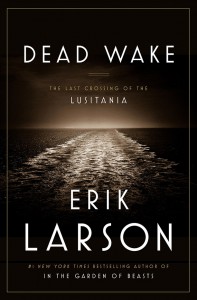 In 1915 the largest, fastest, and most luxurious ship on the ocean was the Lusitania.  Crossing the Atlantic by ship was the only way to get from America to Europe  and back only in 1915 the first World War had engulfed most of the continent from England to Russia.  Britain’s incomparable navy had completely blockaded Germany (though Erik Larson never mentions this precursor) and Germany retaliated with the one technological advantage it possessed on the high seas: U-Boats.  You can see where this is headed and Larson does his best to build suspense but falls short when he overplays the “If Only” card.  If only the Lusitania had left New York twenty minutes earlier rather than waiting for Captain Turner to show someone around the boat; if only the ship was running four engines, rather than three; if only, the fog on the day of the attack had been thicker a little longer or a little shorter or Captain Turner had zigged instead of zagged then surely the meeting of a U-Boat torpedo and the hull of Turner’s ship could have been avoided.  Larson conveniently overlooks the fact that so much of war is chance and instead tries his best to make the case that because the Lusitania was the biggest and fastest ship on the Atlantic, and the first significant loss of life for Americans, that its sinking was what dragged America into the first World War.  As dastardly as it might have been for Germany to sink a passenger liner (there were probably arms hidden on board), and killing so many civilians, the U.S. did not mobilize for another two years.  Another overplay on Larson’s part.