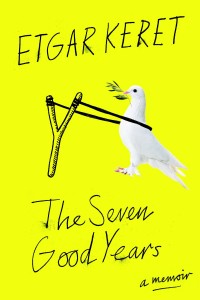 Somewhere near the end of Keret’s memoir covering the seven years between the birth of his son and the death of his father, Keret writes about his experience living in a narrow house in Warsaw, Poland.  The invitation to live in the house comes from a Polish architect who felt compelled to construct a house for Keret that matched the building codes of Keret’s short essays.  The house is tiny, only four feet wide, efficient, fitting between two existing buildings, and yet bursts out the top.  It is three stories in height.  And as life imitates art and vice versa Keret’s recounting of his stay in the house is at first odd and funny and finally brings you to tears when it turns out the house is constructed in the gap between the former Warsaw Ghetto and the slightly less Nazi-occupied parts of Poland.  Keret’s mother, a young girl during WWII, made nightly runs, at the risk of death if she were ever caught, to collect what food she could for her family, all of whom save Keret’s mother, died.  No other writer can wring so much emotion, plot, or character from only three pages.  In this, Keret’s first book of nonfiction, layer upon layer of the humor and tribulations of living in contemporary Israel, a country of profound joy and horror, capture a man and his country like few others.