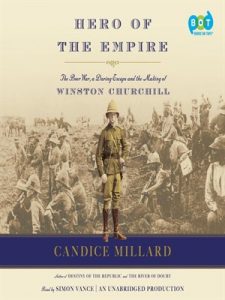 Almost from the day he was born into privilege, Winston Churchill was ambitious.  Searching for an opportunity to demonstrate his talents and value to the wider British empire, Churchill enlisted in Great Britain’s army in India, ran for parliament (and lost), and finally, still in his early twenties, shipped off to South Africa as a journalist to cover the Boer War.  The Boer War was fought between two colonial powers, the white descendants of Dutch settlers and the British with obvious disregard and disrespect for the continent’s natives.  During a skirmish when an English train of soldiers was ambushed by Boer fighters, Churchill-the-embedded-reporter, demonstrated extraordinary leadership and selfless heroism before being captured.  Then, despite overwhelming odds, he managed a solo escape from a military prison across enemy territory and many hundreds of miles of African desert to earn his freedom.  Immediately he enlisted in the army and continued to fight for England.  The traits on display in his younger years reappear some three decades later when Churchill’s self-assurance and stubborn belief in the ability of England to fend off an enemy would make him the hero that stood up to Hitler’s Germany.  And yet in this post-Obama era of Trump, even an historical account of excessive self-confidence scratches up against the border of narcissism that is so intolerable in a nation’s leader.