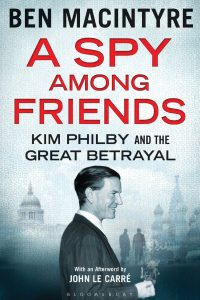 Kim Philby joined the British spy services and the Russian KGB as a young man fresh from university.  The Second World War had not yet begun and Philby was a young leftist at a time when supporting a socialist agenda for the world and opposing Nazism and Fascism by whatever means necessary made sense.  By continuing to spy for the Russians for decades, however, while he climbed ever higher in MI-6, Philby became the highest ranking double agent in the west, responsible for giving away British and American secrets and for disclosing the names of hundreds of British informants and spies that ultimately met their deaths in Stalin’s dungeons.  Several insider’s views of spying are laid bare.  One, British spies of the 1940s through 1960s evidently consumed their body weights in liquor every week.  Two, to be a successful spy requires simultaneous trust of those upon whom you are relying for information and complete suspicion of everyone about you as your opponents are working exceptionally hard to feed you misinformation.  Running an organization of spies, like the CIA, MI-6, or even the KGB, when everyone must be suspected at some level of potentially working for the enemy, has to be nigh on impossible.  The use of Russian and American spies to plant false information or manipulate a foreign public’s perception of its leaders is an ongoing pursuit.  If done successfully, say under current conditions, by hacking into a computer network, it might just sway an election toward a friendly, incoherent, demagogue.