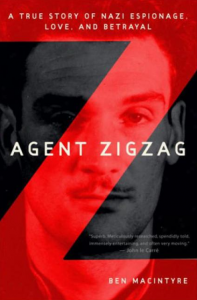 Prior to the outbreak of WWII, the British citizen Eddie Chapman spent his youth blowing safes and robbing banks.  Passing in and out of jails, Chapman learned new techniques for thievery and when he wasn’t incarcerated, he fell in love, seriously in love, with a series of women.  When war erupted, Chapman was languishing in a cell on the isle of Jersey which fell under Nazi occupation and after failing to escape a couple of times figured his best chance for freedom was to volunteer to become a Nazi spy, that is, a British citizen employed by the Nazis to spy on the British.  A year or so later the Germans took him up on his offer, trained him, and air dropped him into Britain for the purpose of blowing up a British airplane factory.  Chapman’s apparent success led him to become one of the most decorated Nazi spies in history, only soon after landing in England, he also because one of the most celebrated spies in the British secret service, where he acted as a double agent spying on the Nazis.  Using newly released documents McIntyre uncovers a fascinating history of the spy war raging between Allied and Axis forces.